All of the sewing for this month took place in exactly 19 days. Somehow I managed to finish 8 entire garments in less than 3 weeks and I’m pretty proud of that.

They were all relatively easy garments, of course. And one was started last month, which I guess is a little bit of a cheat. But the other 7 were all cut and sewn within June.

Here were my original plans:

Not pictured was the first thing I finished: Ryan’s anniversary shirt. I had started this in May so he would have it ready for our actual June 1st anniversary, but…life. He wore it on our trip to Canada (which was part of our 2nd anniversary celebration!) and I really like seeing him in it. Plus the busy plaid helped camouflage some of the wrinkles we couldn’t get out because our AirBnB lacked an iron.

It was the month of Helen’s Closet patterns because I cranked out three in the span of a few days: York pinafore, Avery leggings (hacked into shorts), and Suki kimono, which was the pattern for #sewmystyle in June.

I also tried to make the #sewtogetherforsummer wrap dress challenge with the Petite Stitchery Sunflowerd dress (aff link) but it didn’t quite work out in the boob-covering area.

Dorie had to wear a shirt underneath to keep from showing her goods!

I’d planned to wear dresses to my conference, something I used to NEVER do, so I needed some good bicycle-style shorts underneath, which is wear the Avery leggings came into play. I also made the 5 out of 4 Ninjas (aff) and the Seamwork Kaye for this purpose. Only 2 of them came to Canada. I’ll let you in on which in a future post. 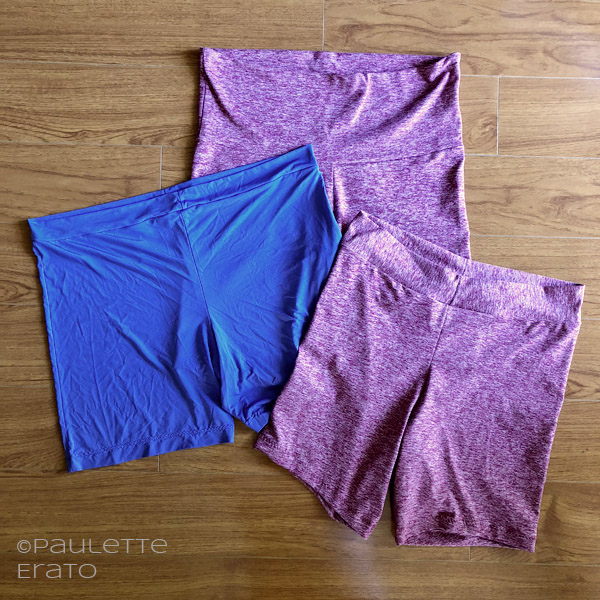 Finally, 1 of the 4 pairs of Seamwork Danas were fully finished and functional before my trip. I love how undies are a perfect stash buster!

The only pattern I didn’t get to was the Seamwork Kimmy, but that’s slated for later this month. As for using the pearl for inspiration, everything was either lightweight against the skin, or just light in color so yay!

This was probably my most successful month in terms of meeting my objectives. And yet, I had the least amount of time. I guess I just opted to work smarter instead of harder and worked on stuff I needed but was easy enough to accomplish quickly. Not bad!