The Game of Thrones Costumes at FIDM is the follow-up to my last post about the most recent exhibition at the Fashion Institute of Design & Merchandising: Awed by FIDM’s 13th Art of Television Costume Design. The exhibition closed this last weekend, but these costumes live on in infamy.

If you are not a fan of Game of Thrones, there is still plenty of artistry to admire in the costuming of this show. It’s, quite frankly, epic. In every sense of the word.

If you ARE a GOT fan, especially if you haven’t yet finished Season 8, then this is for you:

The blog post is long and full of spoilers.

As I mentioned in the last post, this display was the center of the entire exhibition. It was in the middle of the room as soon as you walked in. There was no missing it!

But what was on display was a very clear and shrewd choice. Only the costumes of 5 female characters were in the exhibit: 3 queens and 2 warriors. As you entered and walked counter-clockwise:

Sansa Stark, Queen of the North

Let’s take a closer look. With the exception of the suede coat worn by the Mother of Dragons, all the costumes are seen in the series finale, The Iron Throne.

This is the new armor that Ser Brienne dons after becoming Lord Commander of the Kingsguard. Notice the neckline. Warriors protect their necks.

Usually, the sigil on the breastplate depicts the noble house from whence the knight descends (how’s that for Old English?). But under the New Order of Bran the Broken, Brienne eschewed the “yellow suns on rose quartered with white crescents on azure” she wore to Joffrey’s wedding and takes on a Three-Eyed Raven.

As befitting the Lord Commander, the outfit is comprised of very ornate fittings. Including chainmail and leather accents emblazoned with more Three-Eyed Ravens all around, and leather bias trim.

Even the belt buckle is a nod to the Three-Eyed Raven. Note the leather stitching on the waist piece seams, too.

This suede coat with red trim is not the same jacket that broke the internet. It’s similar in styling, probably because it was both designed by and worn by the same people.

Dany changes into this version of the coat in episode 4, The Last of the Starks. We see it as she’s flying Drogon alongside Rhaegal back to Dragonstone…where he’s butchered by Euron Greyjoy. Until I saw it in person, I hadn’t even noticed there was a difference between the two coats. They’re both very similar on-screen and season 8 was jammed with so much story and action, it was an easy detail to miss. I actually had to rewatch several episodes to see for myself when the switch happened.

But little about costumes is accidental on this show. Dany’s ancestral home is in a warmer climate than Winterfell, so she doesn’t need a fur coat down there. Notice the high-low hem. Très chic!

A version of the red crisscrossed fur shawl is worn during her time in the North, though. It appears to be long strips of fur seamed together and molded over something to give the flare in the shoulder area.

There are red tufts of fur along each seam, and the suede leather has pinked edges (similar to the fur shawl). I really wish I could have seen what this looks like on the inside. There are SO MANY seams!! And they’re pieced together with irregular sizes. This is especially visible at the hem showing both the side and back of the dress.

Look at how they come together at the shoulder.

The coat cuffs had a slit up the inner arm that is laced together with red ribbons. I wonder at the functionality of this. I’d drop these in my food because I’m clumsy.

I wonder why this particular costume was chosen for the exhibition. It does offer a contrast to the mostly muted and drab coloration of some of the others, and she is the only queen in white.

Leading up to the end of the series, Cersei’s costumes became more militaristic. Long gone were the open neck and sensual dresses. Instead, she too adopted the high-necked and slim-fitting attire that while still regal evoked a conqueror. She was arming herself for war and letting everyone know it.

The deep red cloak with gold accents is an homage to House Lannister’s banner colors: red and gold. It’s blood-red, like the blood that is spilled during war. One of her most memorable early lines is, after all, “When you play the game of thrones, you win or you die. There is no middle ground.”

It was another easy miss on the show, but the color of the coat is actually an ombre effect with a dark almost black color at the bottom. The riveted gold accents that create the design in the velvet are impressive for the sheer number. Were they hammered on, machine laid?

The pleating down the front is something else. I can’t for the life of me figure out how it was done on this stiff velvet fabric. It actually looks burned or heat-treated, and the effect is gorgeous. It reminds me of gills.

I find the mannequin’s pose here, which differs so much from the others, to be quite entertaining. With her hands behind her and almost expectant posture, the character’s arrogance remains on display, even after death.

Since she was a child, Arya always wanted to do what the boys did. She was a better marksman than her older brother Bran. Upon leaving Winterfell her beloved half-brother Jon gave her a small sword she lovingly monikered Needle. Her father let her have secret sword fighting lessons when they got to the capital.

So the fact that she grew up to wear the same outfit as other soldiers from the North is not surprising. Michele Clapton described Arya’s costume as:

…cape she wears, like she slashed away the front — it was almost like she’d drawn her sword and slashed away to make it work for her.

That’s completely in keeping with Arya’s character arc. She started out as a tough little noble girl who had to live as a boy to escape after her father’s execution, then continued to survive by adopting different persona until she truly became a Faceless Assassin who could take revenge on all who had wronged her. And ultimately saved humanity by killing the Night King.

If anyone is a badass who can make her clothes work for her, it’s Arya.

On closer look, you can see the leather has a quilted effect in the square pattern. Rivets adorn alternating intersections while leather knots punctuate the intervening corners.

The fur-lined shawl wraps around one shoulder, leaving her left arm (her fighting arm) unencumbered for striking.

The visible stitching around the shoulders makes me wonder how this is finished on the inside. Do the leather straps act like ties so they can be removed (like regular armor) or are they just knotted together inside?

By far the most complex costume on display was the one shown for just a few minutes in the closing scenes of the series finale. Sansa Stark’s ascension to become Queen of the North completes her character arc from naive “little dove” to powerful ruler is written into the construction of the elaborate coronation costume.

It’s an immense and intricate costume and photographs alone won’t do it justice, so here’s a video for a very quick overview.

You’ll notice that the dress is topped with an asymmetric one-sleeved shawl. On the left side (as shown, not worn) it opens at about elbow length to show a cascade of red embroidered weirwood flowers to the hem. Moving up along the shoulders you see fish scales, an ode to Sansa’s maternal lineage. Wrapping around to the other side is black fur and a direwolf head at her shoulder, the Stark sigil. Finally a trail of black feathers down her side signify “Dark Sansa” who is here to stay.

On the front is a metal breastplate, as if Sansa has modeled herself a warrior though she has never fought a battle herself.

QOTN Sansa. The dress was made in the same fabric as the dark Sansa dress, which was the same fabric dyed that was used in Margaey’s wedding dress to Joffrey.. Sansa had a bond with her. It has falling leaves as its pattern. There is a feathered and embroidered dire wolf across her shoulder and not seen here but beautiful red beaded leaves falling from one sleeve. The sleeves are textured like the fur on the first sigil. The metal bodice features the growing branches of the weirwood tree. The Crown is two howling Dire wolves. Nothing is created without meaning…in the final scenes it’s my hands dressing Sansa!!Thank you David and Dan for making that possible..

Starting at the bottom here’s a detail shot of the beaded embroidery all along the edge of the entire shawl. Exquisite!

Moving up the arm to see the embroidery at the cuff, red leaves inside the shawl and the matching fabric in the dress and shawl lining.

Notice here too that the skirt of the dress is seamed in panels that end where they meet and tie to secure the breastplate. The neckline of the dress is also very high and similar to that worn all the others.

From the other side, you can see the embroidery on the dress cuff and the beaded direwolf on the shoulder.

The back of the dress has a train. You can see it’s made up of various panels that start at the bodice neckline and flare out down the back skirt. This is also a great view for appreciating the giant falling leaves print in the fabric.

Michele Clapton has a book Game of Thrones: The Costumes due out in November. I cannot wait to get my hands on it! It covers the costumes from all 8 seasons of the show.

What was your favorite Game of Thrones costume? Can you imagine wearing something so ornate? 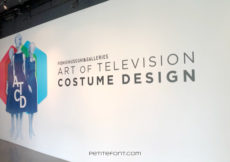