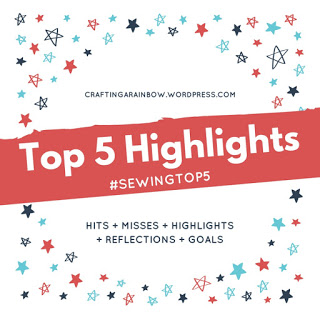 I just learned about the Top 5 recap post that Gillian of Crafting a Rainbow hosts annually. It’s a chance to go through your hits, misses, highlights, reflections, and goals.

I was trying to think of a way to write a 2017 recap and this came along at just the right time! I’ve covered the goals portion already, but I definitely have some hits and misses.

In 2017 I completed 62 projects. That seems like a lot but by comparison, in 2016 I managed to eek out 60 and I also worked a demanding job that had me traveling nearly 3 entire months out of the year. In 2017 I was a full time homemaker for 9 whole months with very few distractions, so 62 seems low to me.

Of those 62, I’ve identified 7 complete fails. The worst of these was the red linen Ogden Cami that stretched out beyond repair.

The rest are mostly unblogged and therefore unphotographed, so no use dwelling on them. I’d much rather focus on the hits anyway! So the top 5 :

This year I tried more selfless sewing (which is a stupid term, and one I will never use again—basically it means sewing for others implying that sewing for yourself is selfish and that entire concept irritates me) and made both my husband and mother a few items. I loved both of these finished products.

El Husbando in his Mexico shirt:

Mom in her floral Loretta:

The rest are all ones I made for me. By far my favorite make all year was the charcoal grey v-neck sweater I made as part of the One Week One Pattern 2017.

This next one was a surprise to me. I didn’t expect to like the Saunio cardigan and yet I ended up with 3 of them anyway (with a 4th on the way soon, hopefully).

My favorite is, unsurprisingly, the grey one (see a theme?):

It was the first one I made and still the most versatile.

Finally, there’s the red velvet number I made up for Christmas.

I love this dress. It’s both extremely comfortable and super cute. It’s great on its own for a sexier look or paired with leggings and boots for something a little more casual but still fun and a bit more snazzy.

2017 was a great year. I learned a LOT and made some great strides in my sewing progress. I’m really looking forward to what I have planned so far for 2018, which currently amounts to about 40 projects. Can I beat 62 though? With less than 7 fails?