When True Bias designer Kelli Ward announced last year that she was expanding her sizing, I was so excited! I immediately reached out and asked if she’d be interested in participating in Sew My Style 2020.

She was the very first designer to commit to the 2020 calendar. Which made my job as coordinator SO MUCH easier. Thanks Kelli!!

That was in September of last year, which is how long I had to keep a secret about her newest pattern release and one of this month’s featured patterns: the Rio Ringer Tee & Dress.

I couldn’t even tell the team of bloggers about it! But it was fun to be in on it and I’m grateful Kelli agreed to plan the launch around the #SMS20 schedule.

She also agreed to do a little Q&A for our audience:

What is your name? Kelli Ward

What is your company’s name and how did you come up with it? True Bias. My company first started as a blog. When I began it I started looking thru sewing dictionaries for terms that I could own the domain for. I landed on True Bias. It was not only available (a big feat on it’s own) but I felt like it had the right modern feel to it.

How long has your company existed? The blog started about nine years ago and then my company began a couple of years after that.

When did you decide to become a pattern designer? When my family moved to NYC I was pregnant with my second child. I had been a photographer before that, but the thought of starting over seemed daunting. I knew that I was spending most of my free time on my blog and sewing so I thought I would try to find a way to make sewing my livelihood. With the platform of my blog already established I was able to go back to school for patternmaking and make it a reality.

What inspired you to start creating patterns? I was very inspired by some of the “firsts” out there in the indie pattern world. I loved that they were making modern designs that were much more fashion forward and relevant.

What background to you have in pattern design? I have been sewing since I was about 8. When I went to college I took a few patternmaking classes as electives, but never thought I would do it professionally. When we moved to NYC I took the opportunity to go back to school at FIT for patternmaking.

What’s your favorite flavor ice cream and do you prefer a cone or a bowl? In Denver there is an amazing ice cream shop called Sweet Action (it is directly across the street from Fancy Tiger Crafts) and they make a flavor called Salter Butterscotch that has become my all time favorite. I never get anything else. Always one scoop in a waffle cone. If you ever come to Denver you must try it.

In the epic battle of cake vs pie, which dessert do you prefer and why? If I could pick any dessert it would be homemade strawberry shortcake. I love that it is fresh and somewhat light without being too sweet. Nothing better on a summer night.

Are you #teamcut or #teamtrace? I am a team cut for sure. The great thing about indie patterns is that you can easily get a copyshop pattern printed that can be reprinted if needed. With printers starting to cater to home sewists it’s become much more economic to do so, plus it gets delivered to your door.

If you didn’t have sewing, what would your creative outlet be? I love to cook. I love hosting dinner parties for the reason that it gives me an excuse to make something fun and for people to enjoy it. I have started to deep dive into pizza making during quarantine. Every Sunday I make pizza for my family, taking notes and measuring to perfection, trying to get it better and better every time. I love it.

What was your favorite TV show as a kid? I loved game shows as a kid. Come to think of it, it was probably the 80s version of reality TV. I loved Double Dare the most.

Click here to read all the Sew My Style Designer Q&As.

New to Sew My Style? Learn more and join in here.

Sew My Style 2020 includes these talented sewists, catch up on their #SMS20 posts:

To stay up-to-date with all the #SMS20 news, pattern discounts and inspiration, be sure to subscribe to the newsletter at Sew My Style 2020.

Pin this to read later: 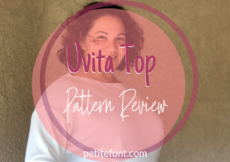