When I made my #2018makenine plans, I had two pairs of pants on the list because I really want to learn how to make them. The easiest way to start: by making stretchy unisex sweat pants (or joggers, if you’re fancy). I figured conquering an “easy” pair of pants would help me relax about making the more difficult pairs later. Enter Simplicity 8268.

It was also the perfect project to test out my new serger skills. El Husbando picked out a black and grey reversible scuba knit, while I treated myself to some really loud sugar skulls on red flannel which was only pennies at Michael Levine so I wouldn’t feel too bad using it for muslin fabric.

Simplicity can run REALLY large, so I’m always hesitant about trusting the size chart and tend to size down at least 1-2 sizes. Given our hip measurements, Ryan was a straight medium and I was a large but I would only have 1/2″ of ease in the hips at that size. The fleece is stretchy, but I didn’t know if that was enough ease. After asking for input on Instagram, I made a shorts version in the medium and it turned out to fit both of us in the hips just fine. One Instagrammer did note that the legs below the knees could be tight so I measured both of our leg circumferences at the knees, largest part of the calves, and ankles to ensure a good fit.

The pants sew up really fast. First you sew the back leg to the front leg at the inseam, then sew both sides together at the crotch. Add the pockets, topstitch the opening from the front, sew up the sides, then add the waistband and ankle cuffs and voila!

Or that would have been the case if I didn’t want to use the serger to make the insides look nice and neat. I ended up breaking 3 needles trying to serge through 5 layers of fleece (2 from the waistband, 1 from the front leg, and another 2 from the pockets).

It turns out that the Brother 1034D is shipped with universal needles only, which makes zero sense since they’re usually used for knits. As soon as I switched them out for large ballpoint needles, there were no more issues!

I basted everything together to make sure they fit both of us, then cut out Ryan’s pair in the gorgeous scuba knit. It’s soooooo cozy, and a poly-rayon-spandex mix so there is some breathability. I’m kind of jealous of his pants. He originally wanted the grey on the outside, but when it came time to cut his he opted for black instead, so they’re black-on-black with the ribbing in the waistband and cuffs. I think it looks pretty chic and modern for a man’s casual pants.

He’s super happy with the fit. And they are a massive step up from his super baggy Target sweatpants he’s been wearing (which are now in a work-in-progress pile waiting to be altered for a better fit—once I figure out how to do that!).

And one box of his #menswearmakenine has now been ticked!

His only complaint is that the pockets are so big, his phone ends up sitting in them horizontally. I also think they’re super large (and really puffy in flannel), but it’s an easy fix to narrow them even once they’re already sewn in.

I also increased the width of the waistband by 2″ because the elastic I bought was thicker than the original waistband and it worked perfectly.

Now to finish my pair! And maybe hit Joann’s for a bit more of that scuba knit… 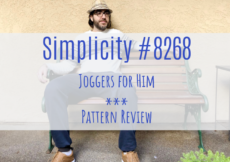